Looking for a good place to wet a line this fishing season? Try a city. 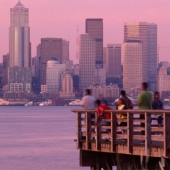 In the middle of Jamaica Bay, I’m standing on the bow of Captain Frank Crescitelli’s 26-foot boat, casting a chartreuse Clouser minnow fly toward JFK International Airport. Hungry bluefish are feasting on helpless bait fish all around us. I can’t figure out which individual fish to target, so I’m frantically trying to cast to them all at once. In my excitement, my backcast hits the antenna on Crescitelli’s boat.

I hear Crescitelli say something, but just as I turn around, an Alitalia 767 begins its descent, and soaks up all noise that’s not its own. Crescitelli’s mouth moves silently for a bit, then he stops, an old hand at dealing with the peculiarities of fishing in and around the biggest city in the U.S.

When the plane finally lands, he looks at me and says, “Dude, you popped your fly off.” We laugh as I tie on a fresh one, then finally make a respectable cast, putting the fly near the nose of a bluefish that, in true New Yorker style, doesn’t hesitate to suck it in. After we release the feisty 10-pounder, Crescitelli gives me a hearty pat on the back and says, “You had a touch of buck fever there, didn’t you?” referring to the overexcitement an abundance of game or gamefish produces in a sportsman.

An abundance of gamefish in New York City? You bet. OK, so you won’t find the solitude and quiet you would in, say, the remote Seychelle Islands in the Indian Ocean. But here’s what you will find: some of the best inshore saltwater fishing in the country. New York City’s water–the East River, the lower Hudson and Jamaica Bay–teem with striped bass, bluefish and weakfish.

And though the harbor is usually crowded with tankers and the airspace buzzes with helicopters and shrieks from airplanes making their descent into area airports, there are remarkably few fishermen working this reborn water within reach of the city’s 8 million souls.

Crescitelli, a raconteur, fishing guide, conservationist and lifelong angler of urban waters, is one of the local masters. He’s witnessed the revival of the New York City fishery firsthand. Fifteen years ago, untreated sewage and 1.3 million pounds of polychlorinated biphenyls dumped by General Electric into the Hudson River had turned the harbor into a cesspool. The Clean Water Act of 1972 started the long recovery process. Concerned anglers like Crescitelli, who founded the Fishermen’s Conservation Association, which focuses on the health of the harbor, moved it along.

Today the fish are even edible–to some extent. The New York State Department of Health says women of childbearing age and children under 15 shouldn’t eat fish containing PCBs. Everybody else can safely eat a half pound a week caught in New York City waters. I’ve eaten both bluefish and striped bass caught near the Statue of Liberty and can report that I am not (yet) glowing in the dark. The taste? Dandy.

This urban fishing revival is not unique to New York. Up I-95 in the Boston Harbor, following years of neglect and abuse, the waters now run clean, and striped bass fishing has taken off. Down I-95 in Washington, D.C., the Potomac boasts excellent shad and smallmouth bass fishing.

In the South, thanks to a cold-water bottom-release from the Buford Dam into the Chatahoochee River, Atlantans can catch rainbow trout within the city limits. Miami offers some excellent peacock bass fishing in its myriad canals.

In the Midwest, the formerly contaminated Detroit River, which once flowed orange and blue from upriver steel mills and chemical plants, now has a thriving fishery for walleye and smallmouth bass. Chicago has excellent bass fishing in Lake Michigan, just off Lakeshore Drive. Out West, you can catch Mako sharks less than a mile off the shore of San Diego, and bass, perch and trout in Seattle’s Lake Washington. And like New York, most of these urban spots, despite their proximity to millions of people, remain underfished. You are more likely to get elbowed off some famous trout stream in the Rockies than you are within sight of skyscrapers. Just be prepared for the incoming airplanes. In Depth: America’s Best Urban Fishing Spots